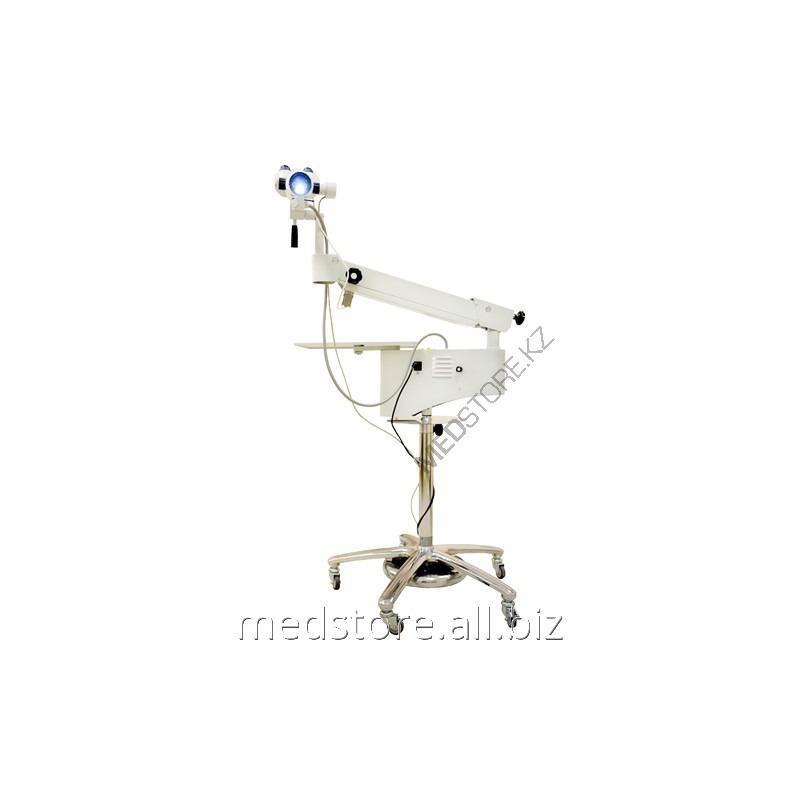 Kolposkop modular binocular KM-2 with the OKVA video system and the software, CJSC ORION MEDIK (Russia) (five degrees of protection), this kolposkop is intended for inspection of a mucous membrane of a vagina, a neck of uterus and the lower third of the cervical channel.

In a design of a kolposkop of KM-2 it is applied:

The design of the navigation system provides the following motions:

The blue-green filter for supervision of vessels and the rotated ocular grid of an assessment of the sizes of the revealed pathologies is provided. The possibility of installation of an optical divider, for connection of a photo and video camera is provided (including digital). The big optional set of lenses and eyepieces allows to optimize parameters of a kolposkop both for routine, and for specialized researches. Optionally kolposkopa can be completed with lighting system of the illumination providing stepless automatic adjustment when changing increase. The floor support is mobile, the optimized dimensions of the basis provide a compact arrangement of a kolposkop with a chair. The possibility of fastening of a kolposkop to a chair is provided. Kolposkopa on a way of protection of the person against defeat by electric current correspond to a class 1 in accordance with GOST P 50267.0-92, on safety and electromagnetic compatibility devices correspond to GOST P 50267.0 (EN 60601-1), GOST P 50267.0.2 (IEC 60601-1-2), GOST P MEK 601-1-1.

Technical specification of a kolposkop of binocular KM-2:

* - it is delivered according to the additional request of the customer.

The computer or the notebook to which the video adapter is connected has to have characteristics not lower than 1,2 MHz of Pentium-3 the processor, and not nizhe1800 Pentium-4 MHz the processor for ensuring full productivity of the camera. Not less than 256 MB of system memory. High-speed USB 2.0 port. The software – Microsoft Windows 98 or WIN ME (USB drivers 2.0 Host of the controller, root concentrators and DirectX 9 have to be installed), WIN 2000 (ServicePack 4 has to be established) or WIN-XP (ServicePack 1 or 2 has to be established)

The note – USB 1.1 the interface does not work with the camera.

To Compare the Products
×